Hera has been an outstanding mare for us. Purchased as a foal she went on to be a Champion at the Arabian All Breeds before coming to us to grow up. Started in 2014, she had one show in hand (Champion Pinto) and then her first show under saddle at SIEC where she did not place but behaved impeccably for a young mare at her first outing. We have since bred two foals from her, the first our dream filly by Django to give us our foundation Baroque Friesian, and then the next year, by frozen semen to young Warmblood Stallion Horizon, for a bay silver filly. Both these young fillies are being retained and Hera has done all we have asked of her as a broodmare.

Hera has been back under saddle where she is showing an aptitude for both jumping an dressage.  In her first dressage competition at preliminary level she scored a 68% and placed 4th (and 6th in her first test).  She is immensely talented and willing but is a negative mare with distinct opinions so is not suitable for a beginner or novice rider at this stage of her education.

She does suffer quite badly from QLD Itch which is one of the reasons for our selling her, she will certainly do better in the southern states or west of the divide. 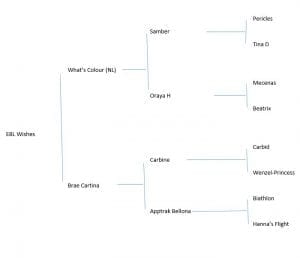