Lovely strong bay filly with a small white star, she is full sister to Tashkent Djohari who has grown into a tall well built gelding. We expect Djaramillo will also be tall like her dam and brother and be destined for a career as a dressage horse.

Her sire Django of Cacharel has been an outstanding representative of his breed, competing for 6 years at Grand Prix Level and for the majority of that time in CDI classes. He represented Australia in 2015 in New Zealand and was on the qualification list for the London Olympics. Her dam Rozzie has not competed due to injury but her grand sire Regardez Moi has been a fixture at international level Grand Prix for many years and her grand sire Salute has also been a huge contributor to Sporthorse breeding in Australia. Djaramillo will make both a great performance mare and dam of potential future champions.

Millies full brother Tashkent Djohari has had and excellent start to his dressage career and has recently been sold to his new dressage home. This filly has all his attributes of good looks and rhythmic expansive paces. 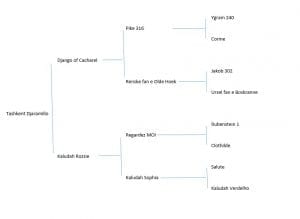