The youngest (by a week) of our three mares bought to rejuvenate our aging herd was supposed to have been one we bred ourselves as we admired Braggo S as a sire so much, BUT it is rather hard to breed a foal when the semen gets left at the airport all weekend. It was our second attempt for the season so we decided to buy the newly born filly on the ground Versailles of Terarossa instead of being behind another year. What a good decision that was as Versailles went on to gain a First Premium at her foal Keuring and was only narrowly beaten by a mature mare for Keuring Champion. We have high hopes for the future of this very modern young filly. She will attend her adult Keuring in 2019. 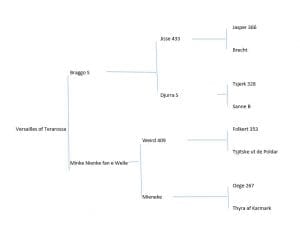